There has been a shift in the art world. Not a recent one, but an on-going change. Artists seem to be moving away from using a bound paper sketchbook regularly. When I was in school – both high school and college – I carried a sketchbook everywhere. I would drag it out and sketch, doodle or take notes in my sketchbooks… on the bus, waiting for the bus, sitting in class, while watching TV, sitting in my dorm room, in restaurants… well, all over the place.

In college, especially when I was home on break, I would get out my sketchbooks again and use up some idle time:

I also did a number of self portraits of various kinds: 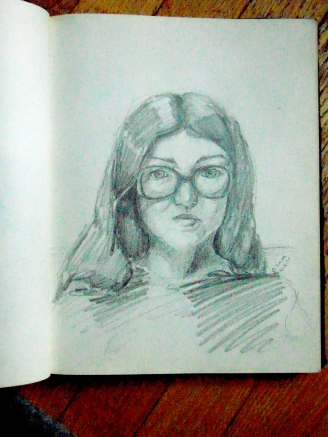 Finished works? Not even close. Most of the stuff in the sketchbooks had almost nothing to do with the “work” I was doing. It was more an idle-hands sort of thing. Later in life, I picked up knitting and crochet and spinning (making yarn) and dragged that around and brought it out in meetings, etc. It helped my brain to listen better if my hands were occupied. I was less likely, when bored, annoyed or frustrated, to interrupt a speaker and ask embarrassing questions or demand answers. Keeping my hands busy helped me be a better behaved employee.

When I used to sit in courtrooms waiting for my turn to testify, I couldn’t really sit there and crochet, so I would sketch.

I have sketches of the judges, the deputies and other people in the court room. But most all of those were on loose papers and many have been either given away (to deputies) or lost.

But when I retired, I found other ways to keep busy. Almost none of them had me sitting still for hours just listening. So, I dropped the sketching again. I would knit, spin, crochet and sometimes braid while watching TV. Sometimes I would use a little sketchbook while out plein air painting to work out a value study or figure out a composition, but I wasn’t really sketching anymore.

But conversations with other artists has led to me remember how important the activity of maintaining a sketchbook can be. Some younger artists (and some older ones as well) have moved to electronic sketch book keeping. Some painters have simply abandoned sketching all together and do their sketches directly onto the canvases and panels for paintings. I realized that I too had really lost the habit of daily sketching. And it bothered me.

I find the practice to be helpful to help me SEE better, to manage eye/hand coordination better, to have a record of my progress, my thoughts and my insights into a visual and relatively permanent record. I love going back and looking through my old sketchbooks (a couple of pages are reproduced above) and looking through my mom’s old sketchbooks. She was really good at sketching even if she didn’t do it regularly.

I started back with contour drawing with pen and ink.

And some graphite pencil and charcoal:

I decided I needed to get back to serious sketch work. I found a class on Craftsy (now also known as Bluprint) about sketchbooking (who knew it was a verb?). I also found groups on Facebook for Urban Sketchers and other sketchbook keeping groups. I became intrigued.

I’ve added a little watercolor to the mix and will probably bring in a bit of colored pencil as well. I tried some conte crayon but find it smears pretty badly in the sketchbooks, so will probably not do much of that. But here are a few recent pen and ink with and without watercolors:

I realized there are a lot of folks out here locally who could benefit from taking up the practice of sketching (and not just artists and kids) but adults who might. I thought to propose A Sketchbook Project to the RAL Art Center in which I would supply about 20 adults (who may or may not be artists) with a small, hand-made sketchbook, a pencil and an eraser (since many beginners are more comfortable if they feel they have the option to make changes); have them agree to do one small sketch a day for 10 days or 2 weeks then bring back the sketchbooks for a group exhibition. Well, the proposal was not considered an ideal or even a truly workable plan by the gallery team (although many on the board of directors liked it). So, rather than make it an RAL Art Center event, I think I will figure out how to do it on my own. Perhaps as part of my studio on the Artisan Trail. … I’ll figure it out. I think it is important.

If you would like to participate, just send me an email, make a comment on the Facebook post or give me a call. If you would like to take a sketching class, let me know that as well. I think I know just the right person to teach it (not me, but a good friend artist who is a great teacher). Maybe we could have a sketch night at my house in the studio or around the dining room table with snacks and beverages… we will figure it out.

One thought on “The Art of the Sketch”

The Art of Blogging