I’m soon to attend a workshop sponsored by the Mid-Atlantic Pastel Society. Our instructor is none other than the esteemed Elizabeth Haywood-Sullivan, president of the International Association of Pastel Societies. You can see some of her work by clicking on the link of her name.

I was chatting with one of my fellow MAPS members, Elizabeth Hood, whose work I greatly admire and she mentioned that she was trying to get her pastel palette arranged in a similar fashion to Liz Haywood-Sullivan’s. I gave some thought to this and realized it might make it easier for me to follow what our instructor is doing if I have some similar arrangement. So, I looked up photos on-line that folks took from other Liz H-S workshops to get an idea of what her pastel arrangement might be.

Also, based on her supply list recommendations/requirements, I had acquired some additional pastels but had no space for them in my box (even though I have the LARGE box). I knew something needed an up-date.

While I have had some sort of hue arrangement to my pastels, it has been pretty arbitrary when it came to value. And I’ve been really bad about keeping my pastels clean.

So, over the course of two days (about three days apart), I tackled the box. I decided to change my color arrangement to something closer to my oil palette arrangement. I also decided to put the darks to the “top” and lights in the “bottom”. There is an overlap in the photos below. I don’t have THAT many oranges and yellows…lol.

Here is what I have left over that don’t fit in the box right now:

Some of those “leftovers” are halves as I broke a lot of sticks in half. I have a lot of turquoise that I love for my glass paintings, but I may not need them  for landscape/water/cloud painting, so left most of them out. I found I had several in the “purple family” that appear to be duplicates or close enough I wasn’t worried about leaving them out and the same with the greens. I also found I had a lot more oranges and yellows than I thought I had which is probably a good thing.

I also learned that I need some practice at identifying values more accurately. I converted the color photo of the palette to a black and white photo, and you can see, I’m off a bit here and there. I’ll make those adjustments later today. 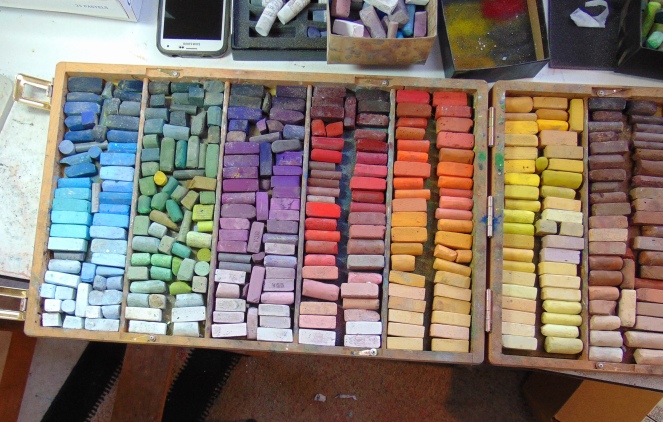 I think I was getting tired at the end and my final, odd neutrals section (far right) was actually upside down. It is very interesting to me how way off value sorting on the browns and portrait colors are, especially in the warm portrait section.

I do think that if I added a just a couple of lighter cool portrait sticks and a medium value pink/red and one nice, darker orange to the odd neutrals section, I would actually have a really nice complete portrait box to work from in a very compact space.

In any case, if I come into a little cash, I think I’m going to get a smaller Dakota Traveler box for traveling and plein air. I sure don’t need all of these outside of the studio.Eventually, I’d like to invest in the Dakota studio trays for my pastels that will live in the studio.

In any case, I think I’m almost ready for this workshop. I’ve got my paper, backing board, tape, pastels, a little folding table, my alcohol, a brush for the alcohol, easel, wet wipes, portfolio and glassine paper for transporting completed paintings, camera, sketchbook, and photos of clouds and water. I even confirmed that the hotel will provide Wi-Fi so I can access my reference photos from the Cloud  with my iPad. And I’m excited!